Last week I ran 33 kilometers through an awesome scenery in and near the small town Viljandi in Estonia. It was not a race, there was no timing and no placement. Instead, there were many friendly and amazing people, (who I hadn’t known before) who did this run with me.

So, how did I end up running in an event in a rural area in the north-eastern corner of Europe, in an event that virtually no one had heard of, with people I didn’t know? It all started a couple of months ago in Vienna, where I was to run the City Marathon.

At the Vienna City Marathon expo, after listening to Haile Gebrselassie, I stood in the queue to collect my race number. Next to me there stood a young woman, and we started talking. She told me she came from Estonia and belonged to a group of runners who took part in the marathon and also promoted a distance run. Kaire gave me a flyer with a brief description and the web address of this run.

From what she told me about the run I was immediately interested. The website was somehow mysterious, it tells about the “first spiritual running event in Estonia” without going into details. So the only way to find out was to take part. After I had returned from Vienna I wrote Kaire that I would like to come to Estonia, but probably not this year. But the thought was in my head. Two weeks later I asked my wife if she wanted to accompany me to Estonia. She didn’t, but told me to go anyway if I wanted to. So the decision was made, and before I could change my mind I booked a flight to Tallinn.

At the evening of Friday, July 13th (I’m not superstitious) I entered the plane to Tallinn. 24 hours later I sat on a bench in Viljandi in central Estonia, overlooking the nearby lake and finishing (for the second time) Murakami’s great book “What I talk about when I talk about running”. 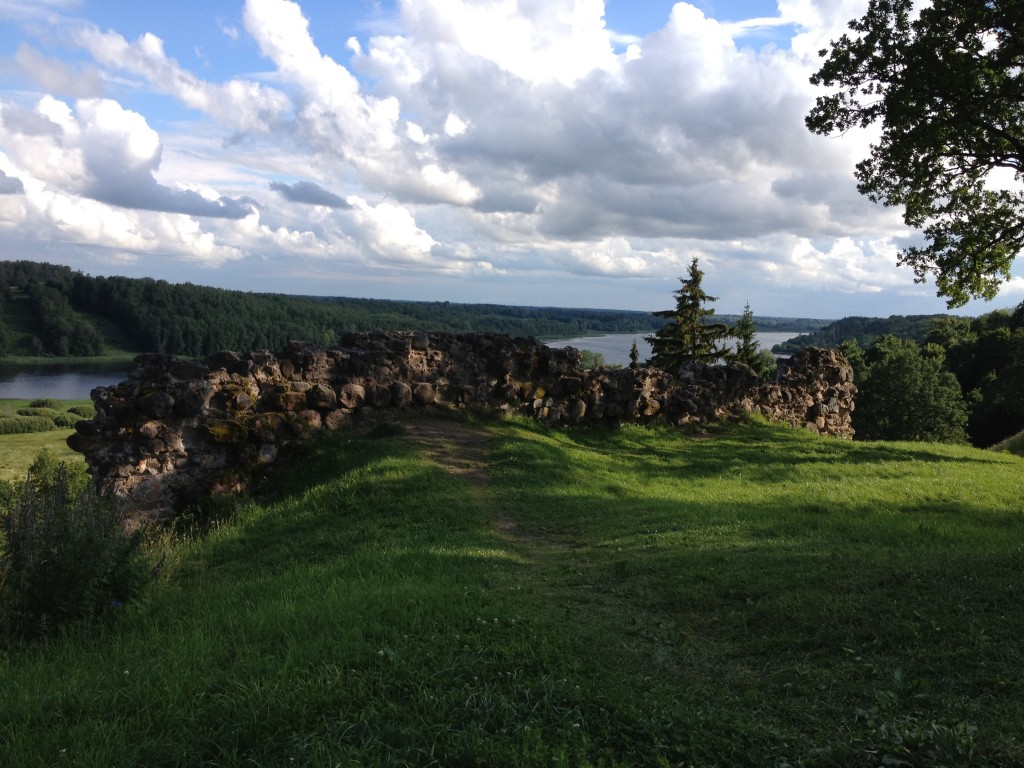 The next day, Sunday, was the day of the race … or was it a race? A race requires proper timing, a winner, result lists and so on. This event had none of these.

I went from my hostel to the start, merely 100 meters, where I met the other runners. Most of them were members of the “Elujooks” (“life running”) running group. Kristjan, the leader of the Elujooks group and race director (except it wasn’t a race) then introduced us to the rules of the Estonian Adventure Run. It was a course of 33 km length, basically one big lap around the lake. Mainly the course followed trails and hiking paths, only a short portion had to be run on roads. Kristjan had designed the course corresponding to the six elements: air, wood, water, fire, earth and metal. We runners would encounter each of these elements along the course, Kristjan told us. Still I had no idea what that could mean. 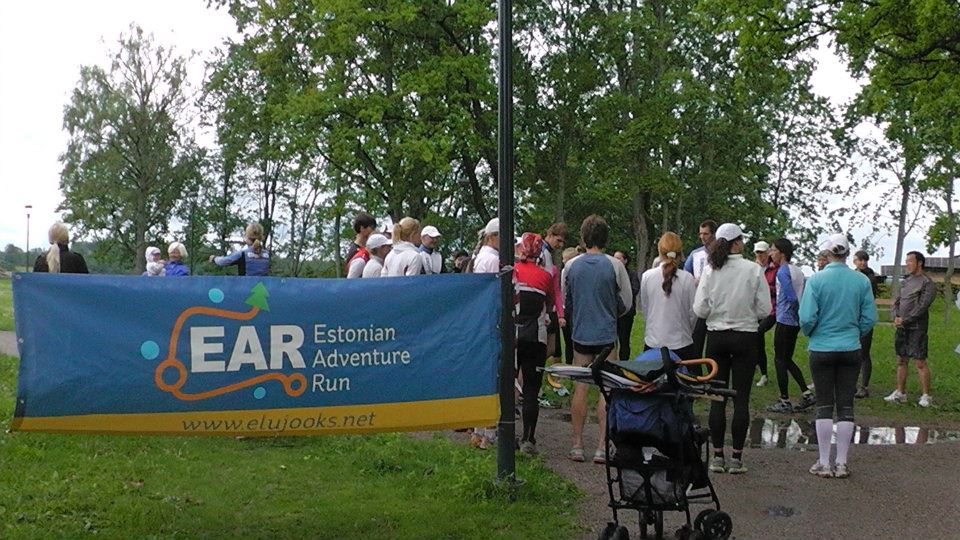 Before the start: listening to instructions

But what I understood was that: this run didn’t focus on time, performance, ranks, running tactics or competition. These things were not important today. Important was to connect with our surrounding, with nature, and with our fellow runners. The course design supported this by putting emphasize on the different parts of nature, the elements.

Of course everything was said in Estonian, but thankfully – my Estonian is not the best – Kristjan repeated the most important parts in English. He did that because, as he said, the EAR was an international event. And in fact two participants didn’t come from Estonia: myself and Hiro, a Japanese who lives in Mozambique and whose wife is Estonian.

So the gun went off (except, of course, there was no gun) and we started. After a few hundred meters there was a narrow downhill trail which owing to the rain of the previous days was deep and muddy, and despite my new trail shoes I slipped and fell. Nice start. 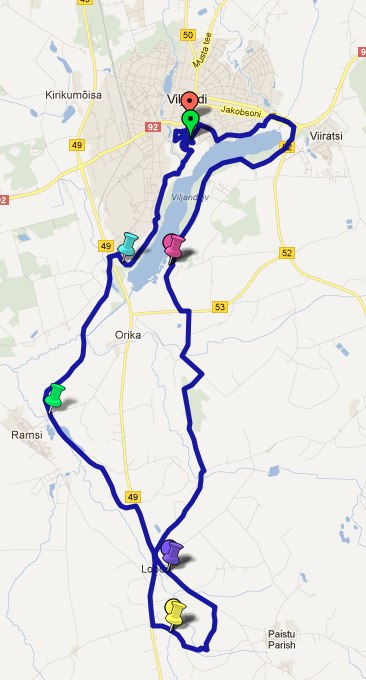 The course went along the lakeshore in southern direction. And there was the first of the prepared adventures: a rope was spanned between two trees. One by one we stepped on the rope, found our balance (or not), jumped and went on. Then there was the second task, which represented the element “air”: a balloon, filled with air, had to be passed from one runner to the next without letting out the air. So each runner had to wait for the following runner to hand on the balloon.

It turned out that Hiro, the guy from Japan, and I ran about the same pace, so we had plenty of time for chatting. And there was much to tell each other.

Other element-related tasks followed: We drank water from an amazingly clear pond; we hugged and kissed trees; and we lifted an iron dumb-bell. At one point there were slips of paper hanging from a tree. On each one a sentence was written. The one I plucked read as follows:

Since my Estonian is limited to one word (“Tere”, which means “Hello”) I had to wait until I had access to Google Translate before I knew what it meant. 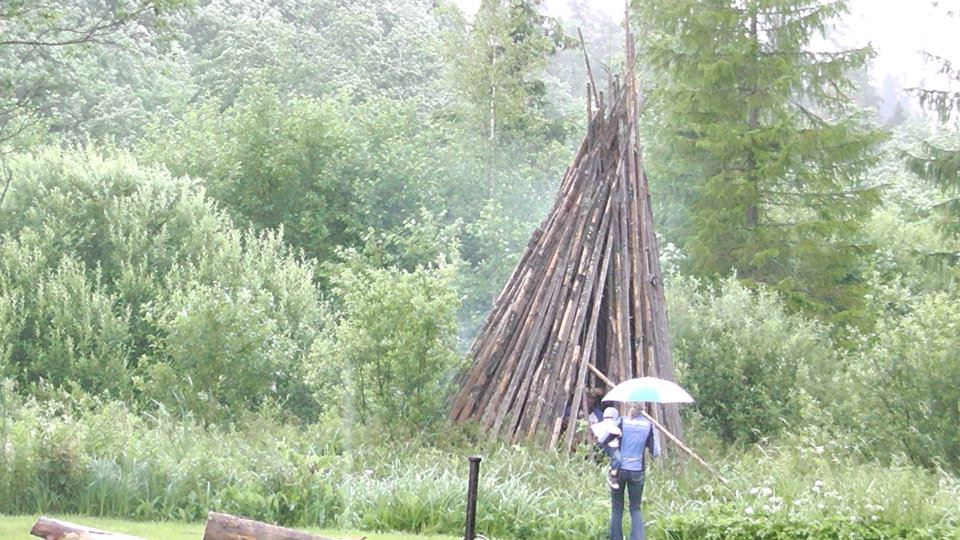 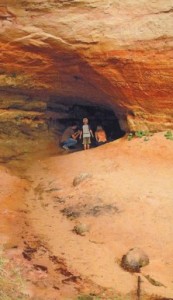 After about 15 kilometers we came to a hut with a fire burning inside. And there we met Kristjan again. He had a message for each of us. My message was to follow Joonas, who would take me to the hell. The “hell”, it turned out, was a red sandstone wall with some caves – a little Grand Canyon feeling in Estonia.

On the second half of the course I ran with a group of fellow runners: there were Hiro and Joonas, and there was amazing Kristi, who, in the fire hut, obviously got the order from Kristjan to supervise Joonas an me. Sometimes Kristi ran much faster than I ever could; at other times she inserted slow sections. Our group was separated many times, but somehow we all reached the finish at about the same time.

Between kilometers 27 and 30 there were a couple of little speed bumps (serious hills); after mastering them we soon were in Viljandi, passed the ruins of the castle where the run had started and arrived at the finish, where we received a wonderful wooden medal.

After the run we all gathered in Viljani’s old gym. There was seljanka and a wonderful cake. Time went by fast and soon parting time had come. I had known these people only for a few hours, but saying good-bye really moved me. There is a great spirit among these group of runners, and I was lucky to be a part of them for a day. The spirit is contagious and I hope to carry it with me for a long time. At least until the Estonian Adventure Run 2013.