Imagine starting a run at 3am on a Sunday. It's dark, but there are other runners on that narrow path. Some of them are faster, but there are also many who are much slower than you. The night is cloudy, but it's not dark, because the path you're running is illuminated beautifully in all colors.

Imagine running in the beaming sunlight. Then, within minutes, black clouds appear and a violent rainstorm begins. However, not for a second you think about stopping your run and looking for a shelter.

Imagine an interval training session that lasts 24 hours. You're supposed to do 30 or more repeats of 1.2 km length at a fast pace, with breaks ranging from 5 minutes to 3 hours length.

I experienced that and much more from Saturday, June 15th, 12pm until Sunday, June 16th, 12pm in the heart of the small town Delmenhorst in the north of Germany. And I'm sure that other and similar miraculous things happened to the some 600 fellow runners who also participated in this awesome running event.

I left my home early on Saturday morning because I wanted to be at the event area by 8am. At a parking lot in Hamburg I picked up my teammate Jenson. Two years ago the “dailymile Team Germany” first took part in this run. Four of this year's team were part of the team of 2011: Sascha, Olaf, Gerrit and myself. Last year Manu from Frankfurt joined us, and this year there were two new teammates: Markus and Jenson. Natalie, another team member of 2012, unfortunately got ill a few days before the race, so she could support us only from the distance via Facebook.

By 10am our team was complete, and after having our team photos made we walked the 1.2 km loop course. Then all of us had to register for the race, and soon it was 12am. Markus, our fastest runner, came in 2nd place after the first lap. In the first hour all team members ran at least one lap, then the one-hour shifts began. Since according to the rules we had to change after every lap, we ran in pairs, each pair taking turns for one our and then handing over to the next pair.

My first shift, together with Manu, was from 2 to 3pm. When we walked to the changing zone, the sun was beaming hot, but we already saw the black clouds promising nothing good. And on my second lap it already rained heavily. Worse, the wind that had blown all morning had become a pretty serious storm. We finished our shift (5 laps each of us) and went to the direction of our “headquarter”, two garden pavilions that we had set up in the morning. Except, there was no pavilion. Only a heap of crooked tent poles next to a garbage can. 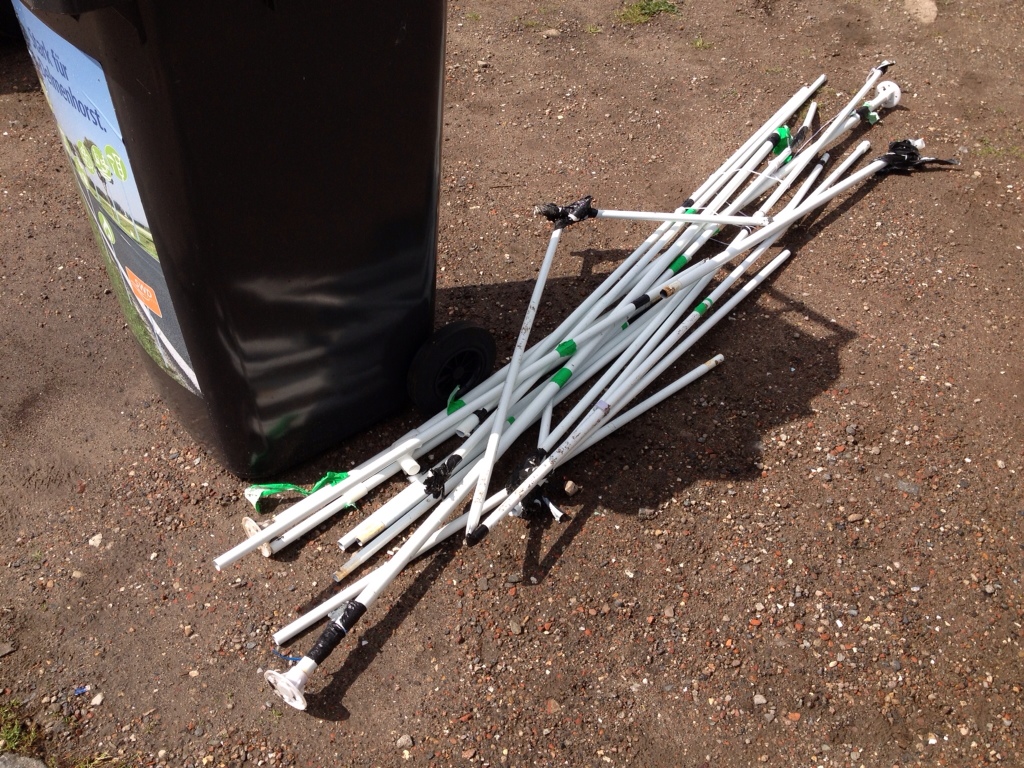 The storm had destroyed our shelter, and while Manu and I were running the teammates had moved into the nearby gym. We had only planned to sleep there at night, but after the loss of the pavilions the gym became our new headquarter. A decent team tent would have survived the storm, but I had not been able to obtain one. I had volunteered to do the organization this year. Sometimes I fancy doing things I know I'm not good at, and I am certainly not the right person to organize an event like this. Seen from this perspective, it was not bad and there were no major catastrophes. Thanks to Olaf, who brought a lot of equipment, and to Sascha, who had the idea for the team shirts and who also did the design!

Running at night is an interesting experience. Every runner should try that at least once. Somehow the time goes by differently. Not faster or slower, just different. The night shifts were two hours long, so that the breaks during the night were longer and everyone had the chance to catch some sleep. Running in the dark was also more relaxed that during the day. There were almost no spectators, and also less runners on the course, because most of the single runners rested for a few hours during the night.

At the beginning of the night there was a great display of fireworks, to celebrate the 10th anniversary of the 24-hours run. I'm not a big fan of fireworks, but I must admit that this one was beautiful. Since my evening shift (together with Sascha) had just ended and I had 5 hours until my night shift, I had the chance and took the time to watch it.

Last year we had finished with a result of 301 kilometers. I doubted that we could repeat this great success, because this year we were only seven (compared to ten last year) and thus each of us had less recovery time between the shifts and more running time. After 8 hours we had covered more than 100 km, after 16 hours more than 200 km. If we could maintain our average pace, we would make the 300 km. And we did it, mainly owing to the great performance of our fastest runners Gerrit, Jenson and Markus. We finished with a result of 304 kilometers, which meant rank 5 of 46 in our category “mixed teams”. A new team record!